Garret Nicodemus first visited Rocky Mountain Tap & Garden at 1071 Courtesy Road in Louisville in March after a basketball game with his son. “I found it on our way back to town,” Nicodemus says. “We stopped for a burger, and it was the first time I had seen this kind of concept. I thought it was neat to be able to try a bunch of beers from several breweries.”

Then he tried to come back a few weeks later. A note on the door stated that due to an unfortunate death in the family, the business was closed. For most people, that would have been the end of the story. But for Nicodemus, this was only the beginning. A few months later he bought the place.

“My wife sent me a Facebook link saying it was for sale,” recalls Nicodemus. “I sent it to engineering friends who always wanted to get into breweries and faucets. They said if I ran it they would invest. I told my wife this town could use more options to gather places with food and drink, and the idea of ​​getting involved in the community sounded intriguing, so after a month of due diligence, we signed a lease.”

Nicodemus and his partnership group then decided to partner with Craft Kitchen Concepts, the team behind Rooted Craft Kitchen at Avanti Boulder and Del Mar by Rooted at Avanti Denver. Craft Kitchen Concepts is led by chef Nicholas Kayser, whose resume includes restaurants everywhere from Hong Kong to Las Vegas. He was also the executive chef of Vesta when it closed in 2020 and has worked under renowned chefs such as Richard Sandoval.

“We did a lot of research to see what people want in this area,” says Kayser. “We wanted to have an identity at Rocky Mountain Tap & Garden. We don’t like to confuse our guests. We like to make simple, really straightforward dishes that there aren’t a lot of questions about.” The menu reflects this, with dishes such as a hot Nashville chicken sandwich, fish and chips, mac and cheese, and a barbecue plate. “It’s slow food made fast,” Kayser notes.

The chef says he has noticed a big shift in consumer knowledge since the start of the pandemic. “A lot of people have had the opportunity to learn about the culinary scene,” says Kayser. “And I think the appreciation is there. Colorado in general, between the beers we serve and the food we make, is very forward-thinking and focused.”

Although the food may be easy to grab, there are specific details that set it apart. “We have burgers on the menu, but we use 100 percent wagyu products from Snake River Farms,” ​​Kayser says. “And I think people are going to these menus now and they’re not like, ‘What’s good?’ They understand what it is and the quality behind it, and we are happy to serve it.” 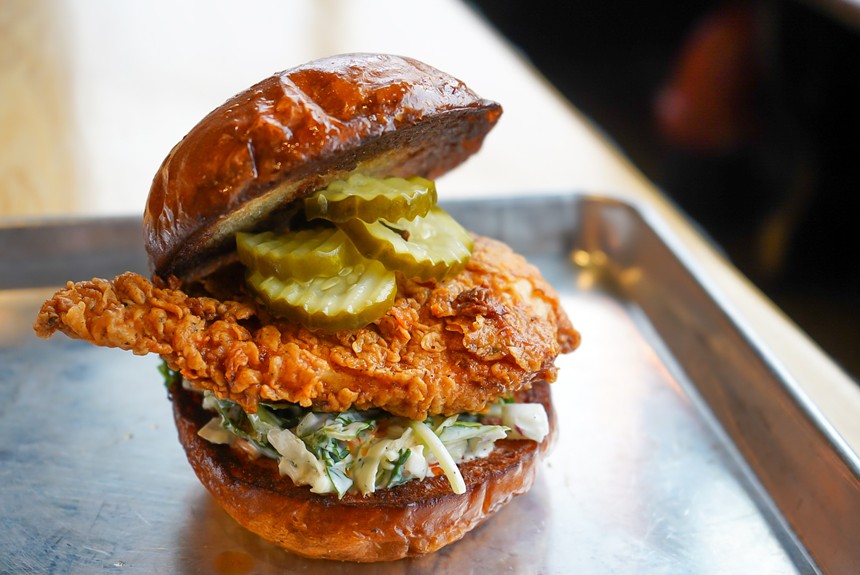 Meanwhile, since the grand reopening in July, Nicodemus has settled into his role of managing the front of the house, despite having no previous restaurant or bar experience. “The first day, I felt like everything was on my shoulders,” he says. “But today I look around and we have experts in everything from marketing to cooking to reception. This allows everyone to focus on the areas they are good at rather than one person. Luckily, I have some experience managing people, issues, and startups, so some of those skills have helped me get ahead faster in some of the [early challenges]. It wasn’t easy, but it could have been a lot harder.”

One of the areas where the two teams have collaborated closely is the emphasis on the gluten-free menu, which includes gluten-free fish and chips, mac and cheese, sausage and peppers, salads and more. “My wife is celiac and one of the other owners has gluten intolerance,” Nicodemus notes. “Every time we go out in this neighborhood, it’s not easy, or it’s not attractive. I always feel bad when my wife tells us to eat and she’s going to wait. So it was important for us to have that. We have the space to have a gluten-free zone; let’s do it right and make sure people understand that we take it seriously.”

Nicodemus is also looking to expand into the large beer garden that borders the parking lot. The team applied for a temporary permit as a prelude to a permanent permit. The move would roughly double capacity to around 250 customers and allow for many more outdoor events, such as a Denver-inspired Christmas market. Until then, special events are planned for the upcoming World Cup, as well as Oktoberfest, and a host of typical entertainment events such as trivia nights.

It is the only self-pouring faucet house in Louisville.

With thirty self-serve taps, there’s a wide variety of beers, from local standouts like Call to Arms Brewing and Westbound & Down Brewing to national stalwarts like Firestone Walker Brewing Company. Plans include gluten-free and alcohol-free options, as well as draft root beer for kids (root beer isn’t self-serve).

The place also has a small arcade. Like the Christmas Market idea, Nicodemus isn’t trying to copy or compete with similar concepts in the area, like the Tilt Arcade in downtown Louisville. “We’re not looking to take away downtown Louisville; we’re looking to do things that support it,” he says, adding that the arcade fits Tap & Garden’s goal of being a family place.

Nicodemus certainly understands that space has to be multi-faceted to be successful. “The beer wall is something that draws people in,” he says. “It allows us to support local breweries. We have to be more than that though. We’re building the beer garden, focusing on great food and trying to support families.”

Rocky Mountain Tap & Garden is located at 1071 Courtesy Road in Louisville and is open from 3 p.m. to 9 p.m. Monday through Wednesday, 11 a.m. to 10 p.m. Thursday through Saturday, and 11 a.m. to 9 p.m. Sunday. For more information, visit rockymountaintap.com.