BORN May 30, 1892, in small offices at Baneswell, the first edition of the Argus only had four pages, with advertising on the entire front page.

That day, he was full of optimism (and presumably exhausted).

In the first edition he wrote: “Hour by hour it (the paper) was improving.

LEARN MORE ABOUT THE 130TH ANNIVERSARY OF THE ARGUS:

“At the end of the day there was on sale a four-page evening paper which was no worse in content than its old established competitors.”

These competitors, The Star of Gwent and the Monmouthshire Merlin are long gone, but the Argus has now reached its 130th year.

Our reports are read now in a way that would have astounded the reader in 1892, or even 100 years later.

While the Argus the stories then appeared on large format ink paper, now most of our readers see the Argus on their smartphone, an invention that has revolutionized the way we work.

But we are getting ahead.

The newspaper that appeared on this day in 1892 was an openly political newspaper in favor of the Liberal Party.

Our first existences were precarious and only the faith of our founder Sir Garrod Thomas allowed Argus to survive those early years.

An active Liberal, he became party MP for South Monmouthshire in 1917.

His financial support helped the Argus move from his small house in Baneswell to High Street, where he remained until 1969.

The last paper he produced at Baneswell marked Queen Victoria’s Diamond Jubilee in 1897.

The Argus remained under local ownership until 1981 when, like many regional newspapers, it was purchased by large conglomerates.

His time on the High Street saw the Argus become a Newport institution, complete with large metal letters proclaiming our home.

Offices here were doubled in 1923 when the site of the nearby Masonic Hall was taken over.

The operation grew again in 1943 when his house was extended on Market Street.

The presses at the Market Street end of the old High Street building were part of town center life.

The Argus South Wales office in the High Street

Huge sliding doors opened on warm days while the presses worked and buyers stopped to look at the massive press room machines.

Journalist George Willey wrote of this time on the High Street: “The ArgusThe lofty red-brick and stone facade overlooked the High Street, while through the massive gates at the back of Market Street, passers-by watched the mighty rotary presses in the engine room churning out the post-war newspapers. midday.

“Reporters worked at their desks, typing copies on aged Imperials and Underwoods. It was all telephones, typewriters and chaos.”

A lot of old Argus the hands would remember how, sitting in the upstairs newsroom, they would feel the building shake as the presses started up and the first editions were printed. Now there really isn’t a whisper as news is carried over wi-fi, 4G and other versions of the ether.

Being on the High Street meant refreshments were never far away. Some pubs have been favoured.

Market Street Trout and Black Swan are the most used due to their proximity. The black swan was affectionately nicknamed the “dirty duck” by those who drank from it.

Murenger’s house was another favourite, where you could enjoy thick, fresh sandwiches at lunchtime.

The advent of war and air raids meant Argus office, so close to the Newport docks, was threatened by bombardment.

Workers were asked to stand on the roof of the building at night as fire watch sentries.

Composer Lyndon Trow, then 15, volunteered for the job.

He admits it wasn’t bravery or patriotism that drove this decision – it was the 7s 6d allowance paid for duty that decided him. It was about half his weekly salary.

In the narrow streets of downtown, newsprint delivery was still a problem. With twice-weekly deliveries, the trucks wreaked havoc as they tried to squeeze into Market Street.

Drivers had to wait for newsroom staff to handle the reels of newsprint, each weighing around 200kg, out of the truck, sliding them on “skates” into the newsroom.

In 1969, the newspaper moved to Maesglas. The move somehow happened over the course of a weekend to the purpose-built site where a new press was installed. 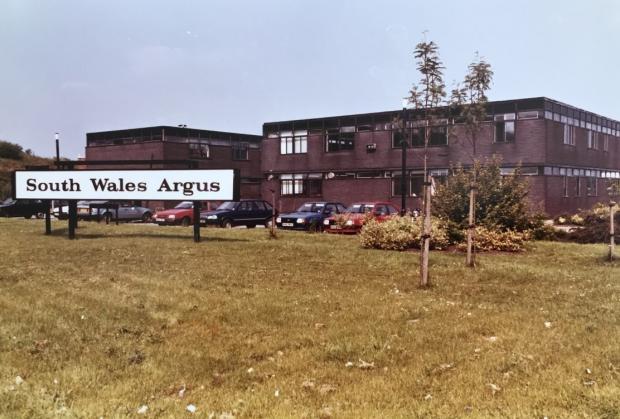 It is here that the pace of change will accelerate in the last quarter century and in the new.

In 1979, the first daily was fixed by phototypesetting and the last by the old hot metal method.

Technological advancements and changes have become a given.

After nearly 100 years as a local business, our ownership changed in the 1980s.

In 1981, after many quarrels, the Argus was picked up by the Express newspapers (publishers of Daily and Sunday Express and daily star). Then in 1985, the Express group was acquired by United Newspapers.

In 1999, after just over 100 years as a broadsheet, the Argus began printing in the smaller tabloid format.

The following year we ushered in the new millennium with another owner, this time US publisher Gannett, which through its UK subsidiary Newsquest acquired Newscom.

They remain owners of the Argus Nowadays.

As our owners changed, so did our production methods. Peter John, former industry journalist and editor, at the Maesglas offices of the South Wales Argus in 1980

And it didn’t come without pain.

The decades that followed saw the industry revolutionized by this technology. Desktop publishing saw the end of crafts like typesetting, as computers meant fewer people were needed to produce the paper.

But the new technology also meant that improvements in quality were now possible and affordable.

From 2004 the Argus the pages were in color.

Other investments, such as the new 4.5 million pound press that could print 60,000 copies per hour, Argus faster to produce.

These vast, towering machines are very expensive, costing tens of millions of pounds. But as their cost rose, older presses, like the one in Newport, closed.

The Argus is now printed on one of Newsquest’s four UK presses, either in Oxford or Weymouth.

With this change, the Argus went into print overnight and was no longer an “evening” paper.

From now on, the latest news, which would have been covered by the new editions of the newspaper, would always be left to the website.

It’s a recognition that the way people consume their news has changed.

They weren’t just given to news installments according to our production schedule. News had to be delivered when they wanted it.

The Argus was happy to do so. Our website traffic has grown from 6,000 users per month in 2000, when our website was launched, to over 4.5 million per month now.

In 2020, just after the country was plunged into the first Covid-19 lockdown, the Argus moved from its Maesglas office – which has since been redeveloped into a Lidl supermarket – to the city centre.

Our new offices are in the Chartist Tower, just steps from where it all began 130 years ago.

The commentary on the first article of 1892 recounted how: “The Argus will endeavor to promote by all means the well-being of the community within which it circulates. Its conductors will endeavor to treat with moderation, fairness and discernment the subjects which are of particular concern to its readers.

He also added: “A constant effort will be made to highlight the great natural resources of the district and the important advantages it possesses.”

When William John Townsend Collins wrote this commentary in his Baneswell garret he may have struggled to understand how the Argus has changed, but he hopes to see that we are doing the same work today as he did all those years ago.

Keeping the people of Newport and Gwent informed about their world and telling them about important things happening.